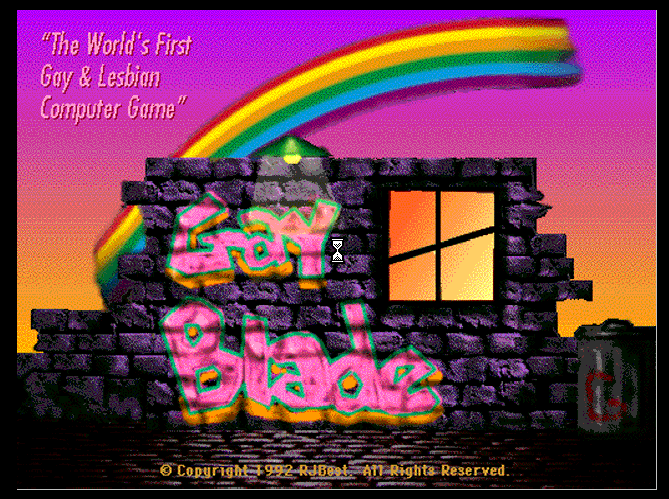 For the Downloadable version of this software, visit:
https://archive.org/details/GayBlade_by_Ryan_Best

SAN FRANCISCO (UPI) -- Egads! Empress Nelda has been captured by the forces of homophobia and is being held deep in a dungeon by an evil lord. Only you and your ragtag collection of gays, drag queens, lesbians and muses can save the empress from the motley crew of evil televangelists, rednecks, neo-Nazis, FBI probes and jocks roaming the dungeon's corridors.

Welcome to the world of GayBlade, billed as the world's first computer fantasy role-playing game for gay and lesbian adventurers.

GayBlade is the cornerstone product of the fledgling RJBest company, which has begun shipping out the first editions of the Macintosh game to selected stores in New York, Los Angeles, San Francisco and Washington.

``This game gives lesbians and gays -- and straight people -- a chance to strike back at homophobia from behind our computer screen,'' said Ryan Best, the 30-year-old developer of the game.

Best and its creative director, John Theurer, modeled the Macintosh game after Dungeons & Dragons board and computer programs that require players to form a rescue party and enter a fantasy world in search of adventure and worldly riches.

But GayBlade puts a decidedly new twist on the fantasy world. Players enter the GB Tavern to put together a team that can include gays, drag queens, lesbians or muses, each with their own unique powers.

Along with the normal arsenal of magic spells and mystical items for sale at the game's Magic Boutique and general store, GayBlade characters also can purchase a variety of unique weapons to save Empress Nelda, such as press-on nails, mace, blow-dryers and purses. Protection is afforded by buying aprons, leather jackets, tiaras and, of course, condoms.

The litany of evil characters roaming the 13 levels and 1,300 rooms of the dungeon include Evil Popes, Queer Bashers, Crazed Zealots and Homophobic Cops.

They are led by Lord Nanahcub, which spells Buchanan backwards: a not-so-subtle jab at at conservative columnist Patrick Buchanan, who was a Republican candidate in the 1992 presidential race and has been an outspoken critic of homosexual rights.

Since the game takes a decidedly political tone, the company said it will donate a portion of the proceeds from each sale to an as-yet- undecided gay and lesbian charity.

While GayBlade is the company's first product, RJBest is not waiting to analyze the impact of its game. Best said the company is in the process of developing two more mainstream computer games that will include lesbian and gay characters but not be geared to the homosexual community.

``We hope to infiltrate the mainstream game market and subliminally educate people that it's OK to be different and OK to be unusual,'' Best said.

Suggestions from the author, Ryan Best:

1) Roll characters by going into the Gay & Lesbian "Nursery"; Roll four different types and name them. They'll appear on your buttons;

2) Once you have your characters rolled, go to the store and buy Lighters so you can see where you're going;

3) Click on the center Dungeon door to go down;

4) Double-clicking on an Item name equips or activates the item (so you can use offensive/defensive weapons and shields);

5) Double-click a Lighter and the dungeon will appear;

7) Each character takes a turn Fighting or Evading;

8) Return to where you went down and the door up to the castle will appear. You can then go to the Medic and heal your characters after fighting.